all your life, that you’re supposed to be the man, to take charge, to make your own decisions. The dreams and fantasies that you have though, they’re telling you that you’re meant to be a slave.

In Surrender to Master I use the power of hypnosis and My special brand of gay brainwashing to help you accept your natural place in the world. Deep hypnosis, mind rewiring, mystical chanting along with My other slaves. You’ll stroke yourself deeper into brainwashed slavery and My teachings will go deep inside you.

This February I treated Myself to five weeks in Guatemala. Fascinating place – beautiful architecture, friendly people – and the “Land of Eternal Spring”. The people were poor as fuck, but happy. Cliche, right?

So I was trying to figure out, why are these people so happy? It dawned on Me – they’re happy because they’ve surrendered – to God, to fate, to their circumstances. Call it what you will. The point is, they’re not beating their heads against the fucking wall resisting that. which. simply. is.

And there’s a lesson for you there. Because I know, so many faggots that are called to be slaves, that fantasize about submitting at Master’s boots, they still fight it. Because all your life you’ve been told that you’re supposed to be the man, to make your own rules. Even though you know all that is bullshit, because you’re meant to be a slave, that indoctrination still makes it hard to kneel and surrender to Master. It’s hard to submit because that bullshit programming is fighting you as you continue along the path of accepting your natural place in the world as Master’s slave.

By the shores of Lake Atitlan 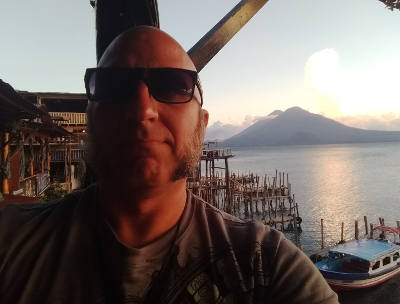 I was sitting in a restaurant on the shore of Lake Atitlan, Guatemala; one of the most beautiful places on Earth. I was thinking about how I was going to help My faggots overcome this problem. Pulling out a notebook I started putting together the solution – My next Slaveheart hypnosis. I designed it to help you overcome that resistance and Surrender to Master, so you can become the slave you’ve been fantasizing about being.

And this one has a little something extra in it, to give you some extra help by planting My will and the need to obey Me even deeper inside you.

This time, for the chanting where you’ll chant along with some of My other slaves and brainwash yourself to become a good little slave, I started experimenting with these Hindu mystical mantras. They’re chanted in such a way that they’re almost sung, and as a result, well fuck, after just a little while working with them as I arranged them in this recording – they got stuck in My head! I found Myself chanting the damned things after I was done working on it. They’re just that catchy and they sink deep in your soul. And that means that these motherfuckers are gonna keep reprogramming you in your day to day, even in your sleep, to be the slave I know you need to be, kneeling before Master.

Now, it’s time for you to listen to what Master has made for you. It’s gonna rewire you to get rid of all that back-and-forth, to surrender at My boots. You’ll feel so good as you accept your place as a slave. Now you know what time it is slave, it’s time to Surrender to Master.

2 reviews for Surrender to Master – Slaveheart #11